With LiteCoin’s first-ever halving completed in 2015, we are already beginning to see the effects of the next one even in 2018. So what better time to discuss exactly that. So sit back, this is gonna get interesting.

By no means is LiteCoin the first coin to be halved. In fact, back on November the 28th of 2012, BitCoin underwent its first ever halving. So we already have a good idea what to expect just by looking at history.

Okay, so what do we actually mean when we refer to a coin as halving? Well, it’s pretty simple. It means the mining award halves. So in the case of LiteCoin, miners are currently awarded 50 new coins for solving blocks. After the halving, miners will only be rewarded 25 LiteCoins per block. This process only takes place once half of all the coins are in existence. And then another half, and another half, and so on and so forth.

The the halving process doesn’t just happen once. For both BitCoin and LiteCoin, this is set to happen every four years as is stated in their code. but for other coins, this may vary. And while nobody really knows for sure when the last few coins will be mined, we expect it to be around 2142 for LiteCoin and 2140 for BitCoin based on the reward over this time.

Of course, by then only 0.00000672 LiteCoin will be mined each day, until eventually all 84 million LiteCoins are in existence.

Clearly this is a positive thing then. As inflation slows each time, less coins flood the market, and therefore everyone’s coins rise in price as a result. So why vendors of LiteCoin actually look like this before the halving? Well, the most likely answer is people are actually expecting the price to rise. So in anticipation of our buying up these “cheap” undervalued coins in their mind while they are at this current price. We should also point out that cryptocurrency has come a long way in 2012 when BitCoin underwent its first halving.

Thus in turn, this sudden rush and demand of people wanting to buy in has in turn pushed the price of LiteCoin higher.

There is, however, one more part of the equation: the miners. So as we know, miners invest in specialized equipment in order to actually mine the coins. And just like the actual business, they need to make a profit otherwise it’s just not worth them doing so. And now that their income is about to be cut in half, a lot of their ineffective equipment is about to be shut off. That is unless the market price of the coins rise to a point where they can continue to make a profit. 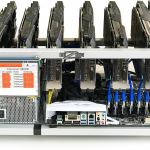 Either way, the miners face one of two options, those being: The price rises and everything stays pretty much the same as it is now; however, if it doesn’t a lot of miners will no longer be able to operate. In turn, the network hash rate will drop as they begin to shut off, leaving only the mining farms in places such as China working, in turn resulting in a less distributed network. If a network hash rate drops low enough, the mining difficulty will automatically adjust itself, meaning those who stopped may be able to start mining again at a profit. And while we do not know how high the price will go during this period, we do expect that after all is said and done the price will settle higher than it was in the view leading up to the halving.

We're not around right now. But you can send us an email and we'll get back to you, asap.